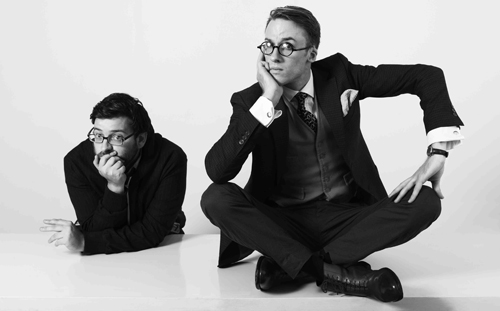 The Correspondents are without a doubt one of the best duos in music right now. Chucks’ production skills combined with Mr. Bruce’s flamboyant stage presence have turned them into a live act you simply must see. Don’t just take our word for it either, The Telegraph have sung their praises of the dynamic duo, and as long time fans imagine our excitement when we finally found out the release date for their debut album (March 2014 in case you were wondering).

Earlier this year we asked Mr. Bruce and Chucks when they think their album would be completed, it wasn’t so much an interview, we were backstage at Meadowlands festival and threw the question at them rather casually as they prepared for their set. Back then, in early Summer, they had not managed to pin down a definitive date. Who can blame them? They tour relentlessly, constantly evolving their sound, playing an average of 3 shows a week across the globe, so no wonder it has taken this long to keep in a studio. The result however, is one I think you will all appreciate if this lead single is anything to go by. The production value feels higher than that of their ‘What’s Happened To Soho?’ E.P, with that distinctive combination of bass driven beats and quick tongued vocals performed to a standard that precedes the work before them. I challenge you to try and listen to Fear & Delight without at least tapping your feet and nodding your head along to the pair’s unique but oh so appealing genre bending sound.

For us here at Art Noise, this release marks an exciting moment for the UK music industry, as we look forward to what will no doubt be one of the greatest albums released this decade.

Have a listen via the video above and tell us what you think!

Fear & Delight is released on December 9th via From Our Own.
Debut album ‘Puppet Loosely Strung’ out March 2014.

The Correspondents are touring on the following dates to promote the single: