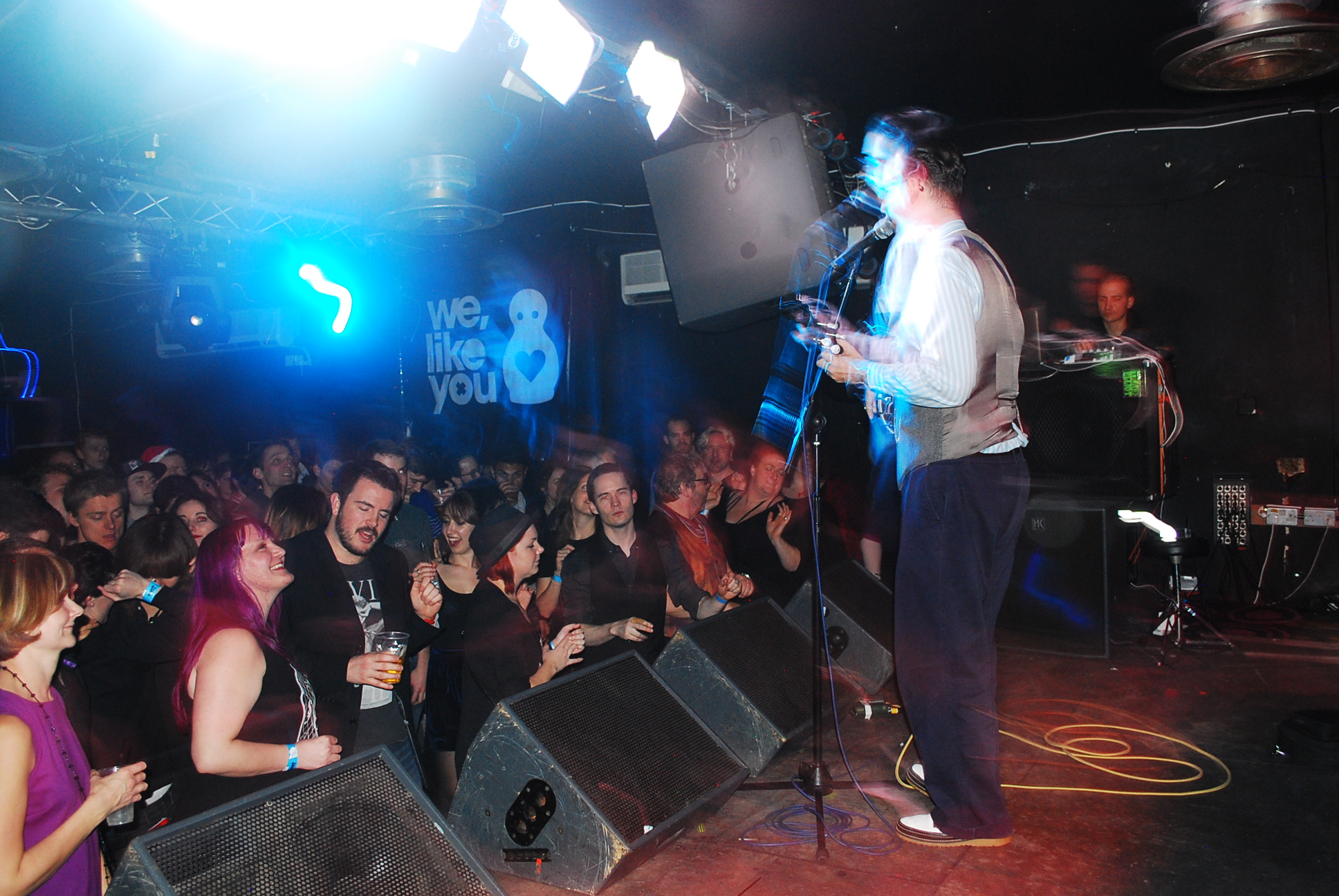 The moustache twiddling, banjolele strumming gentleman of hip hop was polite enough to let Art Noise grab him for a quick interview after his performance at Brixton Jamm on 14/12/13.

You’ve just got back from America, how was it?
Mr. B: America was a lot of fun, I must say I was in New York for a couple of weeks, and a little bit of Pennsylvania as well, and it was splendid yes, and you think if things need to be done they can get done.

We have been following the chap hop scene for a little while now, and obviously the other name that springs up from the genre is Professor Elemental. Is the rivalry between you two real, or merely a staged bit of fun?
Mr. B: I think we’re all chums now really, for a short while he was a little bit miffed, but we got around it, after a while I think he realised I was a fine gentleman, that sort of thing.

Is it the better moustache that caused it do you think?
Mr. B: It was possibly the moustache, but probably because he was doing gigs and people were saying ‘hey Mr. B, we think you’re really good’ and he was thinking ‘what? imposter’, that sort of thing.

What was there main reason for you getting into making hip-hop for gentlemen, or chap-hop as you say?
Mr. B: It was a culmination of lot’s of other things I’d done in the past. I’d been in a hip-hop band, I had done some producing, I had even been in a punk band who sung about drinking sherry and having cravats, a sort of dandy punk sort of thing. Then I was in a band playing a banjolele, and I thought I would bring the whole thing together, so I put together a tune, put it up on MySpace (it was back in those days), and someone asked to book me for a festival, so I thought I better write a full set then. The idea was sort of fermenting in my head for a long time, but I thought let’s go for this, see what happens, and here we are.

So what next? What is the next big plan for Mr. B?
Mr. B: Gosh all sorts of things, I’ve had various meetings with people who appear to be important but probably aren’t, but there is talk of film and TV things, and obviously I’ve been promoting Can’t Stop Shan’t Stop, the new long player. Chap-Hop Business Concern, my record label is about to release a compilation called ‘Tis acid rag time’ which is acid house mixed with old rag time music, which is all silly samples and is very very good fun yes.

That sounds amazing, when can we expect to hear that?
Mr. B: Well I will be collecting things from all sorts of people for it in the first couple of months in the new year, then I will be getting together the new ‘Mr. B Gentleman Rhymer music all acid sound system’, which will be my DJ set, so hopefully around festival time, sometime next year (2014) any way.