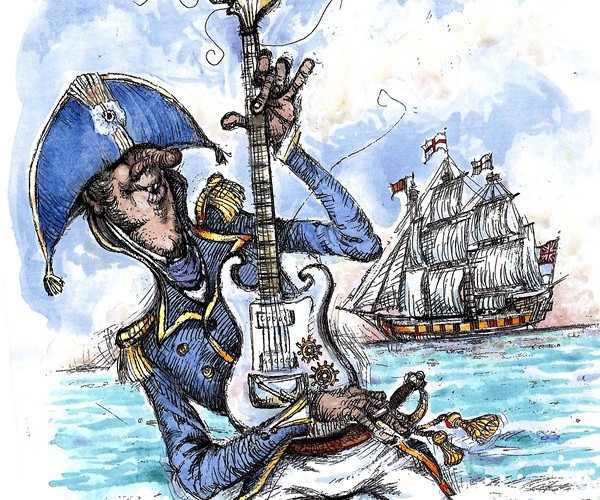 I was first introduced into the world of Martin Gordon back in 1977. I was walking down The Mound in Edinburgh and I had nipped into one of my favourite record stores. Rummaging through the latest 7″ release box a sleeve design jumped out at me – the logo was not that different from the old Radio Times logo, a photo of a band, a woman dressed in stockings and suspenders, a layer of grubby fingerprints and a song called Dirty Pictures! Whats not to like! I paid the 50p and a love for the Radio Stars started that day and continues now. Martin Gordon started out in the 1970s with the brothers Ron Mael and Russell Mael in Sparks. Martin played with Sparks on the album Kimono My House, which featured his trademark Rickenbacker 4001 bass. “This Town Ain’t Big Enough for the Both of Us” and “Amateur Hour” were UK hits from that album. “This Town…” made No. 2 in the UK Singles Chart. He then formed Jet and then Radio Stars, both bands featured singer Andy Ellison. The Radio Stars charted with Nervous Wreck.

Martin has continued to produce music, and lots of it, as you can see from the image below, made up from various sleeves and covers from his website.

Martin Gordon and his music Sounding like a cross between the Small Faces and Winifred Atwell, Gilbert Gordon & Sullivan trawls through a selection of the finest compositions that the pairing of Gilbert & Sullivan ever put together. All have been re-imagined for a popular beat combo of today. Out with the soapy strings and matelot choruses, in with the electric guitars and, erm yep, matelot choruses!

Martin introduces Modern Major General as “Modern Major General: produced by three Albanian goats personally suckled to maturity by Jamie Oliver”. An intelligent video to watch and perhaps just a touch of humorous similarity towards Terry Gilliam’s work with early Monty Python. And, if you pay attention, you might catch a fleeting glimpse of a Radio Star tucked away in there. Give it a watch and have a read!

With his vast knowledge of the music business, Martin is well aware of the inevitability of successful musical partnerships hitting the rocks. Whether this is for time-honoured ‘musical differences’ or as the result of insoluble dental problems (which led to Stars’ untimely demise), bands always break up sooner or later. Gordon has devised a foolproof methodology to counter this trend, however. “I thought it would be a good idea to form a band with primarily dead people in it, except for me.” In this way, claims Martin, there can be no arguments arising from dissatisfied composers, who both passed away in the early 1900’s, objecting to radical arrangements of their material, no bitching by lily-livered lyricists taking issue with the singer’s rendition of their precious words. “Dead people, let’s face it, aren’t really in a position to complain much about anything. It’s stiffs for me from here on in!” he declares robustly. The eternal diplomat, Gordon indicates that “I will naturally be only too happy to listen to any points or issues that Gilbert  & Sullivan raise, at least within reason, but I imagine that any disagreements will be short-lived and in any case easily resolved by a show of hands”.

Track one is the Lord High Executioner, from The Mikado and is an excellent opener for what you can expect from this CD, well…kind of expect, from the next 15 tracks. No track is the same, and each one has something unique to offer the listener. Stunning artwork by Chris Townson – Captain of The Pinafore

I was into the second song – “When I was a lad”, and I broke into a cold sweat. The song brought back memories from long ago – from when I was forced into the school production of HMS Pinafore. I had not heard that song for more years than I care to remember. But this is so much better than my faded memory will allow me to reflect upon. Gone is the dodgy piano player/music teacher with a comb over, gone is the out of tune tinkling on the very old upright piano. In comes Martin Gordon! The piano, a better played and sounding one, is still there, but now an added Rickenbacker bass, guitars, drums, vocals and the backing vocals mixed together and what you have is a stunning variation. Then factor in the almost Pythonesque sounding (sorry Martin!) backing vocals, the matelots, the fade out of the track featuring seagulls and waves crashing on the beach. This is genius and unadulterated fun! The talented Chris Townson produced the image on the disc but it has a hole slap bang in the middle – so here is the original image in all its glory.

A policeman’s lot is extraordinary. A stunning electric guitar intro starts off the track, the arrangement and vocals sorted by Martin then fully kick in and takes you away, and back in time with the 100 year old lyrics. This track belts along at a furious pace. Stunning electric guitars, the drums and that bass bounce at you. It is breathtaking. “Evening All”.

This is a stunning disc, grab a coffee, sit back, listen and enjoy. Everything from the sleeve, notes, imagery and sound are all finely crafted and put together to deliver a unique and hugely entertaining experience. Be prepared as the orchestra has gone and been replaced with “guitar, bass, drums and piano, with the odd (sometimes very odd) flourish from flutes, horns, kazoos, melodicas, Jew’s harps and selected items of cutlery“.

I really feel this is actually an important work. These old operettas are just that, old. They are constantly performed across the world to an audience that usually know of Gilbert & Sullivan. Amateur productions of these works and of course those done by the world famous D’Oyly Carte Opera Company keep the musicals alive. BUT this album shows what could be done and could bring this music genre to a younger generation. A generation presently missing out on the fun in taking part in such productions and losing out on musical history and heritage. I could imagine a school year-end drama group putting this on stage replacing the piano with a pupils rock band doing some of these, and HMS Pinafore is a prime candidate for such a revamp.

Martin Gordon, armed with a wicked sense of humour, talent and dedication, is probably the only person I can think of who could transform, with such care and respect, material that is over 100 years old and turn it into a rock n’ roll album! And, importantly, pull it off. Respect Mr Gordon!

Did you have fun making this? Well, it was rather stressful doing the vocal, as this was the first time I undertook the entire job myself. But Pelle Almgren approves. This was pop music of its day. I imagined the Small Faces playing this material – that was my musical starting point. So the template was knock-about, rough, spirited…  and also fiercely satirical, music that I felt I could bring it into the modern day with suitable arrangements.

Whats coming up for Martin Gordon? I did trot out ‘Lord High Executioner’ here in Berlin recently, as an experiment, and I hope to do at least one UK performance, maybe in conjunction with an impending anniversary. But more of this in due course.

Martin Gordon – on the web