It was a hot sultry Saturday night in Brighton as I headed for Concorde 2. Walking past the screen on the beach showing the Wales Euro football match, I was heading for a gig rich in punk history, Angelic Upstarts, Sham 69 and Brighton’s own Dirt Royal.

Tonight was a triple band night and first off was Brighton’s own, awesome Dirt Royal. Dirt Royal are: Charlie Russell: lead vocals/bass, Leon Fenton: lead vocals/guitar, Loz Hood: drums and vocals. I have covered the band a few times in various online blogs and forums, but I was looking forward to this. These hard working guys deserved this – a big stage, big lights and a hell of a big sound. I was so lucky to be there to witness Dirt Royal where they should be – up there! Dirt Royal ploughed into us with “Radio” and then “Girl in The Shop”. They sounded good, no actually they sounded great! Into the next song dedicated to their manager Mick – “It Was You”. This is a belting song and this track pulled more people in from the bar area to watch and listen. Dirt Royal hit us with “Dr Weekend”, another of their singles. Leon jigging across the stage, Charlie leaping into the air while the man at the back, Loz, powered at us peering through cymbals and high hats. A short set, a great set and new fans!

The venue suddenly was packed, people squeezing in and up against the stage barriers. The temperature went through the roof, it was damned hot in there! On to the stage strolled MENSI (Tom Mensforth) The Upstarts hit us at full tilt. The mosh pit was created within seconds of the band starting up and punks young and old threw themselves around for the next 30 minutes. This, ladies and gentlemen is how a punk rock show goes! Music, heat, alcohol and fans slamming into each other at a rate of knots. Lots of bruises to show off in the morning. 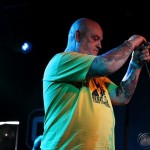 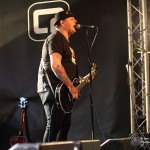 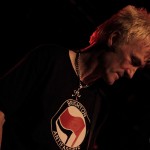 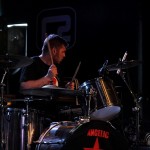 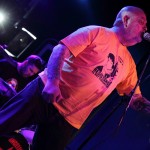 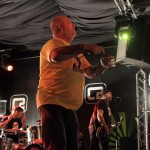 Mensi center stage fronted a great line up tonight and performed a set of songs and vintage tracks and singles that today still sound fresh, angry and most certainly stand the test of time as punk classics. Teenage Warning and I’m An Upstart both served to stir up the crowd and invite some shouts and participation from the crowd madness in front of me. It was crazy for a while and even the security guy moved me further behind the barrier as he tried to avoid the flailing mass of hot sweaty bodies. A great set from these guys. Sadly, after this gig I heard that Steve and Neil had their guitars stolen. I hope they get them back safe and sound.

I never saw Sham69 back in the day. The media were over Sham 69 and that their gigs were loud, noisy and disrupted by large fights breaking out among the crowd. Lights dimmed and out shambled the lean, gaunt frame of Jimmy Pursey. Sweat already running down his face – I did mention it was hot! He grabbed the mic stand and stood motionless, his eyes staring into the crowd, surveying his audience. He drew a breath “1-2-3-4” and we were off! “What Have We Got” kicked the gig off. “Ulster Boy” and “Tell Us The Truth” came at us hard and fast, the Concorde 2 sound guys must’ve cranked up the volume, this was loud punk and rock and roll. 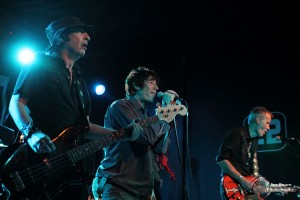 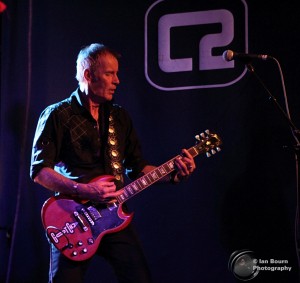 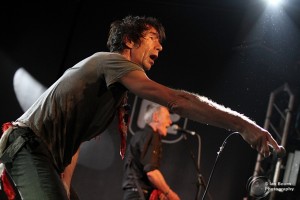 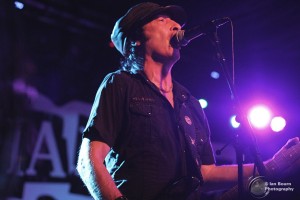 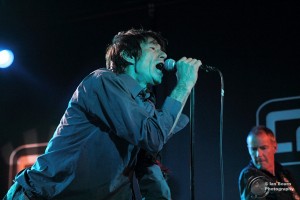 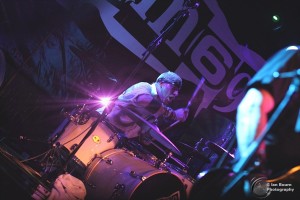 The band was made up with Jimmy Pursey on vocals, Dave Parsons: guitar, Dave Tregunna: bass and the brilliant Robin Guy on drums.

“George Davis is innocent” came at us. The song still full of passion and heart, it was originally released in 1978, and I leave you to find out more about the song. This track was swiftly followed by “That’s Life”, the title track from the sublime album of the same name. Pursey bumping across the stage holding out the mic to the crowd who, true to form, joined in with the chorus. “Borstal Breakout” was up next as Mr Pursey then growled “who’s got a dirty face then?” Dave Parsons kicked his guitar into overdrive and “Angels With Dirty Faces” was next up. There were plenty of Sham69 fans here tonight to raise a loud, sweaty, rousing chorus!

No time to breathe, no time to wipe away the sweat – here comes Sham 69 performing an incendiary, face melting cover of the Clash’s ‘White Riot’ The singalong continued as the set closed with “If The Kids Are United”. Jimmy Pursey was jumping over the stage. Robin Guy and Dave Tregunna providing a now deafening barrage of bass and drums as Dave pierced the sound with the famous guitar riff. This is one of those classic anthems that closes the set, leaving the few hundred people desperately wanting more, and damn near brings the house down!

Sham 69 were tight as, pumped and running on adrenaline and the legend that is Jimmy Pursey gives a punk rock performance of snarling pure class.

The band back on stage and Dave parsons delivered the opener for “Hersham Boys” – “yeaaah” screams Pursey. The crowd singing along with the “laced up boots and corduroys”. These guys had been working hard, in that crippling heat for 45 minutes and came out looking fresh and ready for another session!

“Anyone going down the pub?” asked Mr Pursey, the crowd responded with a huge punk cheer.  We were treated to an extended live version of one of finest punk rock songs I think ever committed to vinyl. Jimmy nodded at me, winked and smiled as he headed to the pit. He stood above my head, dripping with sweat, splashing onto my camera and me, he towered above me. As he climbed back down onto the stage I was treated to a SHAM69 twerk from him! The song finished and goodnight!

Wow! That was loud and over too quickly! I certainly hope I get a chance to see this line up again. They are great live and I have to say that as live bands go, I’ve rarely seen many do better. They are a great punk/rock and roll band and I finally got to see them and able to photo the set. Great songs, tonnes of energy and a top frontman.

Thank you, Sham 69. You are a great rock’n’roll band, just don’t stop!

A huge thanks to Mick R, Dirt Royal, Angelic Upstarts and Sham 69.

Also a massive thanks to the Concorde 2 management, security staff and Chris – stage Mgt team. Concorde 2 is one of my favourite venues and the brilliant staff are just fabulous – thanks guys!