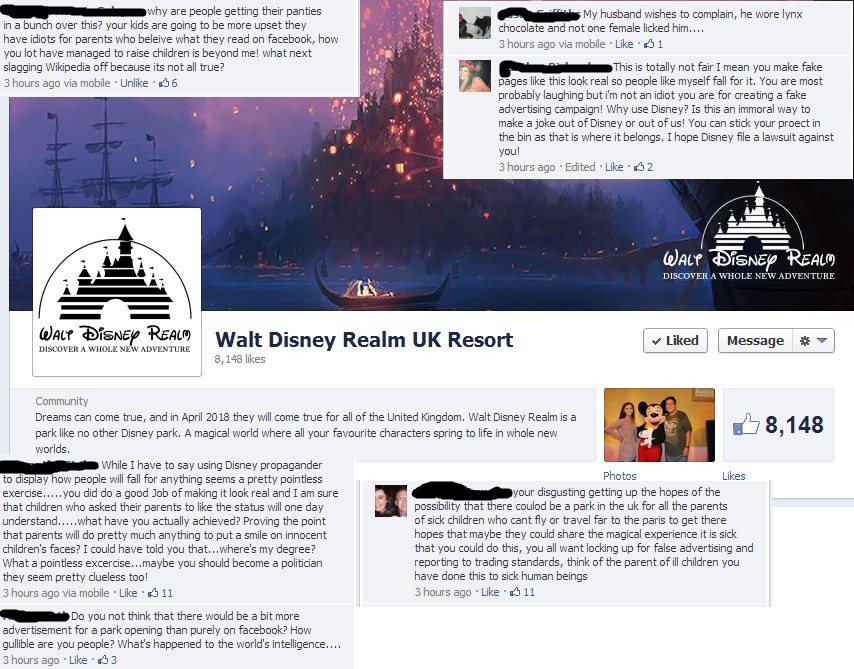 This is a story of ethics, social media, and not believing everything you read on Facebook…

Back in the second year of university, I did something by accident that turned a small project into a mass social experiment in a matter of 4 days.

I accidentally tricked over 8000 Disney fans into believing a park was opening in the UK.

This wasn’t some malicious attempt at creating then destroying children and parents dreams, but a marketing project for a university module. The brief: pick an existing company, design a new product or service, and write a marketing strategy for launching that service.

Simple right? Every other group, like us, made Facebook pages, to add screenshots for visual aid into the report. What I did was make that page a little too believable. Testament to my experience in graphic design and a basic understanding of marketing and advertising techniques I managed to make the page for Walt Disney Realm (the name of the ‘new’ park) into something people would be drawn to in excitement. You can view the page here (I left it up after originally removing it as a sort of reminder for people). As you can see, the number of people have dropped, and I have since added MARKETING PROJECT to the title to stop any more people getting confused. In fact, there was a point where the page hit 12,000 likes, but by this point I had stopped taking screen shots, so you will have to trust me on that one.

The primary source of activity came from this post here: As you can see, a simple poster was mocked up, and then a call to action in the form of a ‘like and share’ competition got peoples attention. I shared it a few times amongst friends, and at first, that was all that happened. As the image showed, that changed rather drastically. What that image doesn’t show is that this happened over a period of 5 days!

4 days after posting it, on a cold, wet Saturday, the amount of shares started doubling, then tripling, until it reached around 150-200 shares an hour. I simply watched this happen, transfixed at the phenomenon.

Suddenly, the news started spreading across the web, with conversations popping up in blogs and twitter too, and although not everyone believed it, it was getting a lot of hype: It is quite amazing what a powerful effect a brand can have when combined with social media, and one random other factor that happened to coincide with our park launch completely by chance: the talk of opening of a ‘Disney style’ park from Paramount studios in 2018. Yes, because that bit of news had Disney in the title, it fuelled peoples belief this was the real deal, and so on that same weekend, I told everyone the bad news and shut the page down… but not before receiving a torrent of abuse (and support), which some page followers found so amusing that they made this montage for me: So the lesson in all this? Well I guess there is several that most people are clever enough to know:

Lessons learned for all I hope?