Gogol Bordello has spent over a decade electrifying audiences the world over with its internationally acclaimed gypsy-punk sound. Tonight it was Brightons turn to see the band back in a show at the Brighton Dome. A touring force, the band averages 200+ shows each year in locales across the U.S., Europe, S. Africa, Russia, Australia and Japan, and has performed at prominent music festivals such as Coachella, Bonnaroo, Lollapalooza, Fuji Rock and Glastonbury. The Band – I think! There are a lot of them!

It’s okay that the self titled Gypsy Punk outfit set started with the raising of a huge back banner – name and artwork from the new album on a Thursday night in Brighton at The Dome. Eugene bounced, well flew onto the stage clutching a bottle of red wine. He danced around in a frenzy, grabbed the mic and No – it was a dud mic – Eugene clearly singing at us in his own style – but no sound!  He kicked the faulty mic away and just grabbed another.There were loads of mics to choose from as there were so many band members. It was like a circus troupe had taken to the stage with so many performers and musicians, and, not forgetting to mention the vast array of instruments up on the stage. It’s fast up there, It’s flashy up there, Gogol Bordello are in your face from the word go. The music and theatrics seem to draw inspiration from the dance, punk, music, and stage presence from around the globe. The result could be a mess, but not with these guys. It was well “rehearsed”  with the musicians producing a mix up of sounds that seemingly have been collected from around the world. The band’s members hail from Ukraine, Russia, Ethiopia, Ecuador, the U.S.A. and Belarus — that also gives a good idea of the influences used by Gogol Bordello.  What other band can you think of that has two female members whose job it is to give some backing vocals, run around and scream at you and from time to time banging on various items scattered across the stage. 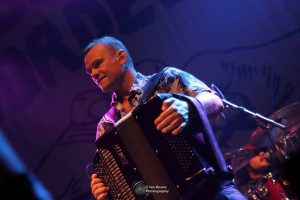 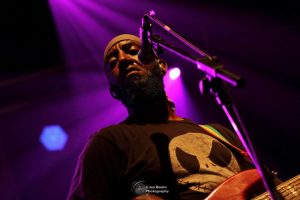 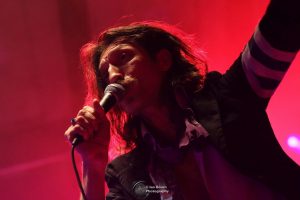 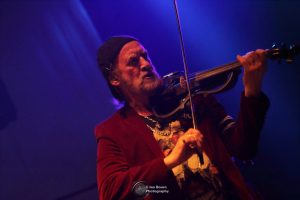 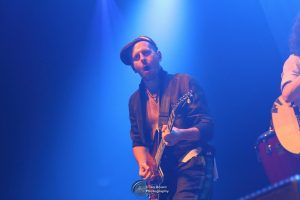 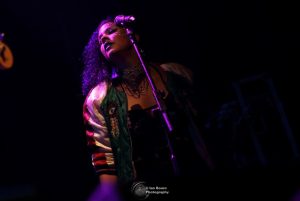 Eugene was on top form! I haven’t seen the band before – but he danced, sang,  and performed. He lead the band through a musical stomping riot of a set. The crowd obviously knew the material and joined in with the chorus and chants.  What a show man, and so generous as he pushed and cajoled members of the band to make for the front of the stage and get involved. The crowd loved it! Eugene just didn’t stop and whilst so much was going on he had his hand firmly on the rudder steering the performance.

Every member of Gogol was thoroughly entertaining to watch and listen too, and I was aware of stuff going on I was missing while trying to capture the essence and magic of this performance. Sadly the drummer, and I always remember the drummer, spent most of the gig in a smokey haze.

As this juggernaut of a show moved on, the clothes came off! Eugene quickly stripping down to a bare sweaty chest which was later rubbed into the crowd as he jumped off the stage into them. The mad fiddle swirls its magic, the accordion being pumped furiously and amongst it all is a sparking electric guitar, a vast set of drums pounding out from the back of the stage, and a well used bass guitar. Gogol Bordello are on another level, their own level. They own it all – the stage, the sound and the crowd. There is seriously nothing like this doing a tour circuit at the moment. Seriously good. Unbelievable to watch. It may have been one of the best “shows” Ihave seen in a good while. This band had me transfixed for the whole set and show. It was simply overwhelming.

After nearly two hours, selfish I know, I just didn’t want it to end. Nobody in the hot and steamy Dome did. Well played!

Thanks to the staff and team at the Brighton Dome. Its been a while since I was last there, always lovely to talk to and always happy to help. Thanks so much guys.