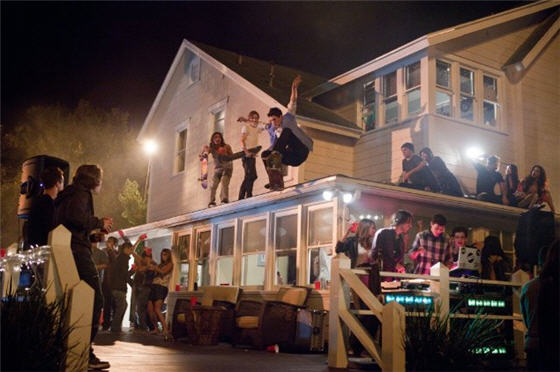 So how do you guarantee visitors will turn up to your event? We delve into a world of fictional and non-fictional events, in an attempt to make the most popular event advertising campaign ever. This is most certainly not going to guarantee the event is good, but you will at least have a turn out larger than the population of China. If there is one thing Project X taught us, it is that ‘high school’ girls like to party, and where there’s 18-year-old girls partying the boys will follow. Unfortunately this means your event will now be filled with a bunch of teenage idiots throwing up on your shoes and trashing your house. You may also end up with a dwarf in your oven too, if that movie is anything to go by.

Attendance Boost: 2000 people
Event Success: 3% (Unless you are a 17 year old boy, in which case you just became a legend) Bill Murray is renowned for crashing parties, to the point that he went on a house crashing tour (he didn’t actually, however there are plenty of times where he has joined random people in celebrating and drinking). Now, the first time you bring Bill to your event, it will probably be a fairly low-key affair, however, when you throw the next event, the word of mouth news that Bill Murray is a visitor should send attendance levels through the roof. I mean let’s face it, who doesn’t like Bill Murray? In fact, name one event that Bill Murray visited that wasn’t successful, except maybe the premiere of Garfield. You are throwing a 3-hour talk on the discovery of a new amoeba in the South Pacific. Usually this appeals to a few hundred, possibly a thousand scientists and teachers, who are all very excited. But how do you excite the rest of the world? Well, follow in the footsteps of other mega events, such as the Olympics. Sell tickets for an opening ceremony ahead of the talk, buy a few pyrotechnics and a smoke machine, and get a monarch to parachute out of a helicopter. Instant big hit with plenty of media coverage too.

4)   Piggyback on the success and popularity of others This is a simple yet completely genius way of making people turn up to your event. If X-Factor is in town doing auditions, you are hosting the unofficial after party. If Justin Bieber is playing a concert, make your event the warm up show. If the second coming of Jesus is happening (or first if you are Jewish), sell some hot cross buns and advertise a sandals only door policy. Little things like this will make people think your event is far more important than it really is, and the look of disappointment on your guests face when they realise it is merely an empty room, complete with a cheese spread and a 70’s disco CD playing ABBA hits, will be priceless.

Attendance Boost: Variable depending on event you are piggybacking
Event Success: 20% O.K so you didn’t host the World Cup, or put together the line-up for Glastonbury, or arrange 1000s of nerds to turn up to Comic-Con, but that doesn’t matter, because a few business cards and a banner can make you look like the worlds greatest promoter, and you don’t even have to do any work. Sit back enjoy the ride, and if it all goes pear shaped leave via the nearest emergency exit. Funnily enough this idea in itself has been stolen from another publication, and I cannot even remember which one to give them credit.

Attendance Boost: N/A (It’s not your event to boost in the first place)
Event Success: Who cares? You are just there to steal food from the buffet and talk to people who don’t realise what a rat you really are.