I had been looking forward to this night since seeing Wizard Sleeve perform at The Hope and Ruin a few weeks previously.

This was not going to be a straightforward night. The event was an extremely private one,  an invite only exclusive party and held on a houseboat on the River Adur in Shoreham. The houseboat seemed to be made out of buses, aircraft and washing machines. It was a nervous walk clutching camera gear onto the boat across a gang plank that looked as if it had seen better days. On Board: For Wizard Sleeve

Getting into the large room you were hit by humidity and the excitement from those who had arrived and from the band members. The room was large and festooned with balloons and a collection of skeletons, flags, bottles, it reminded me of an Alice Cooper nightmare stage set. At the far end was the business end. The amp power switches glowing, guitars poised, a kilt on the floor, mic stands everywhere and the drum kit.

The opening band of the night was “Chilli Gibbon and the Purple Monk” The band made up with two players Ryan Hyland – guitar/vocals and Ollie Smith – drums. They delivered a short, but very sweet set. I think we got 15 minutes. Ryan is also the vocalist for Wizard Sleeve, but here we saw him loaded up with a guitar. Among the set was a blast of Black Sabbath’s “Paranoid” and it was pretty good! 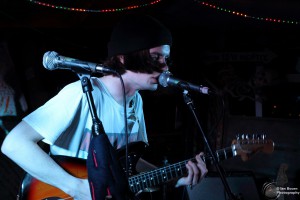 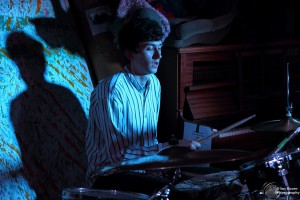 The houseboat had filled up quickly, Wizard Sleeve had undergone some kind of transformation. Black eye makeup (or perhaps they had fallen overboard!), masks and outfits – this was a different Wizard Sleeve to the one I had seen before. Good on you guys! This was to be a fun night and the stage had been set for one! 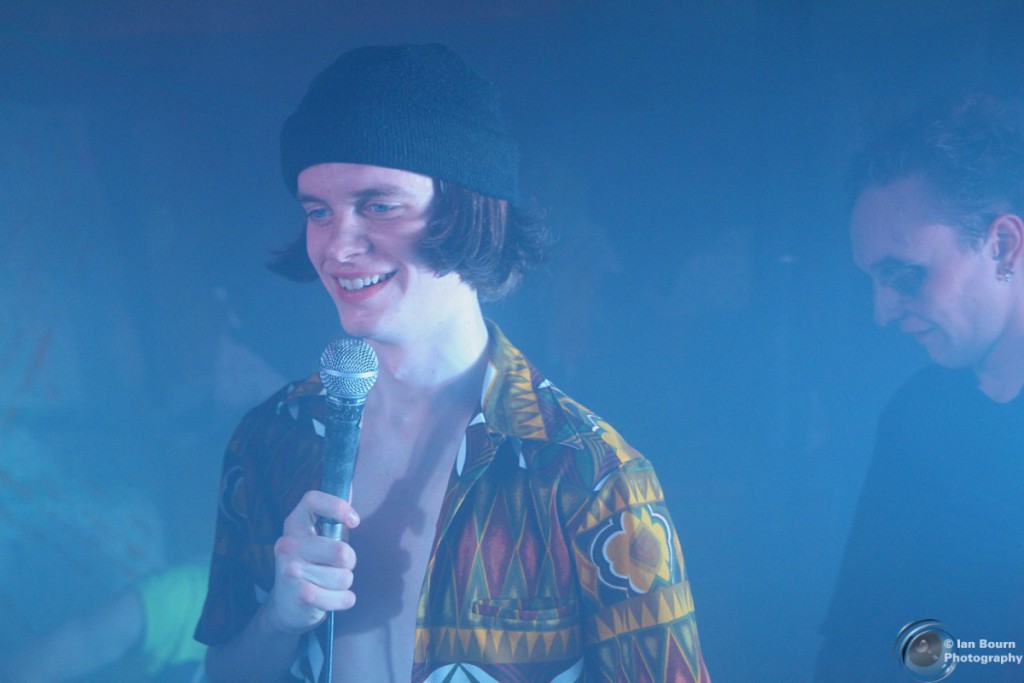 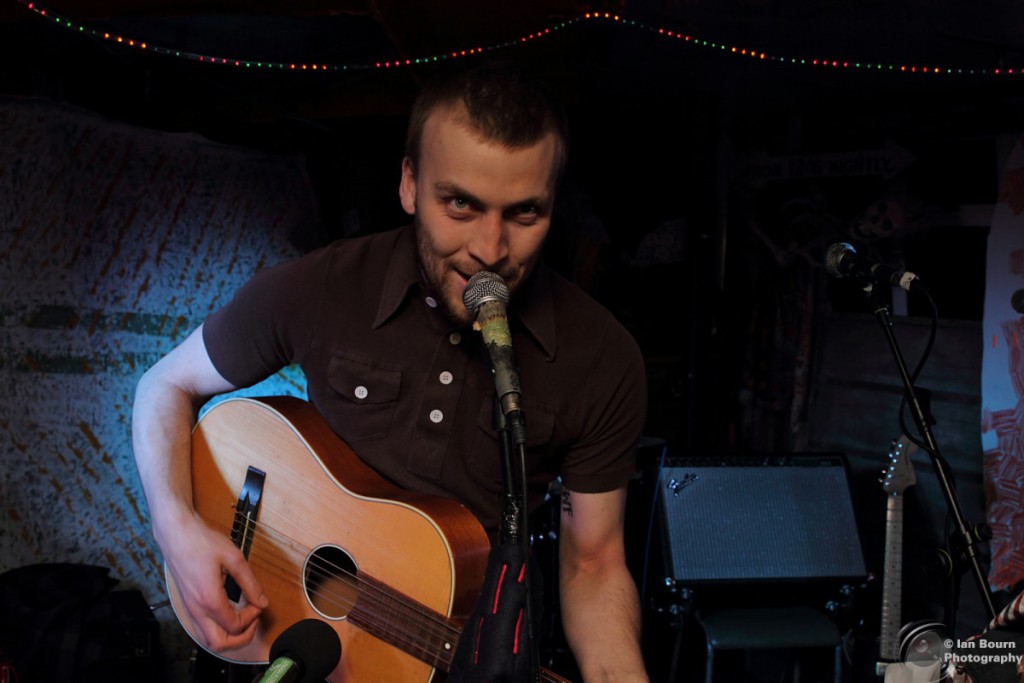 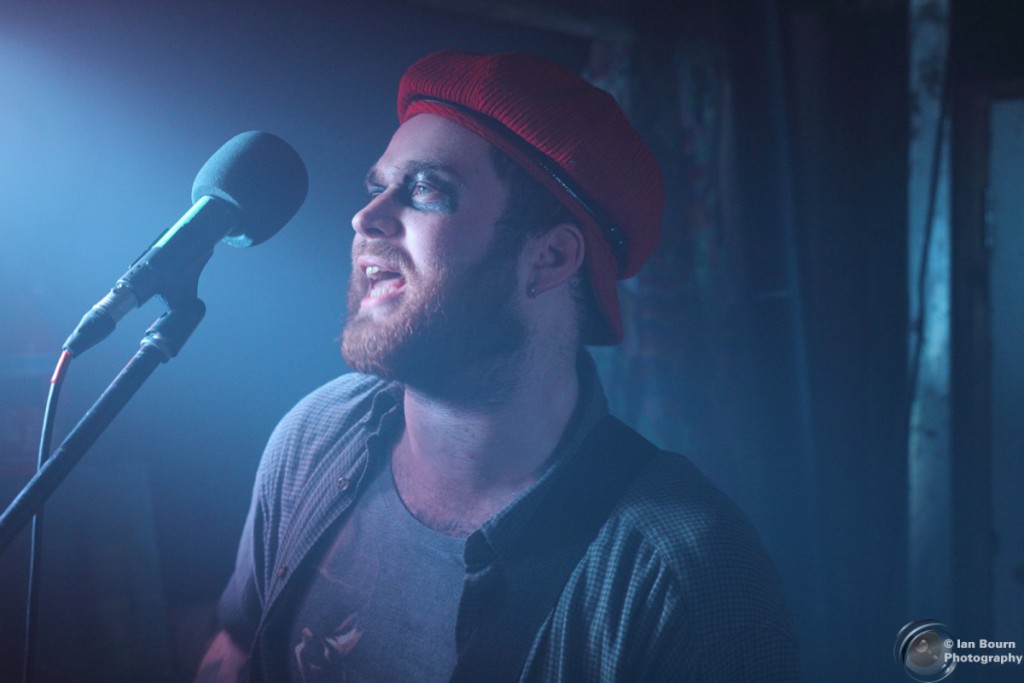 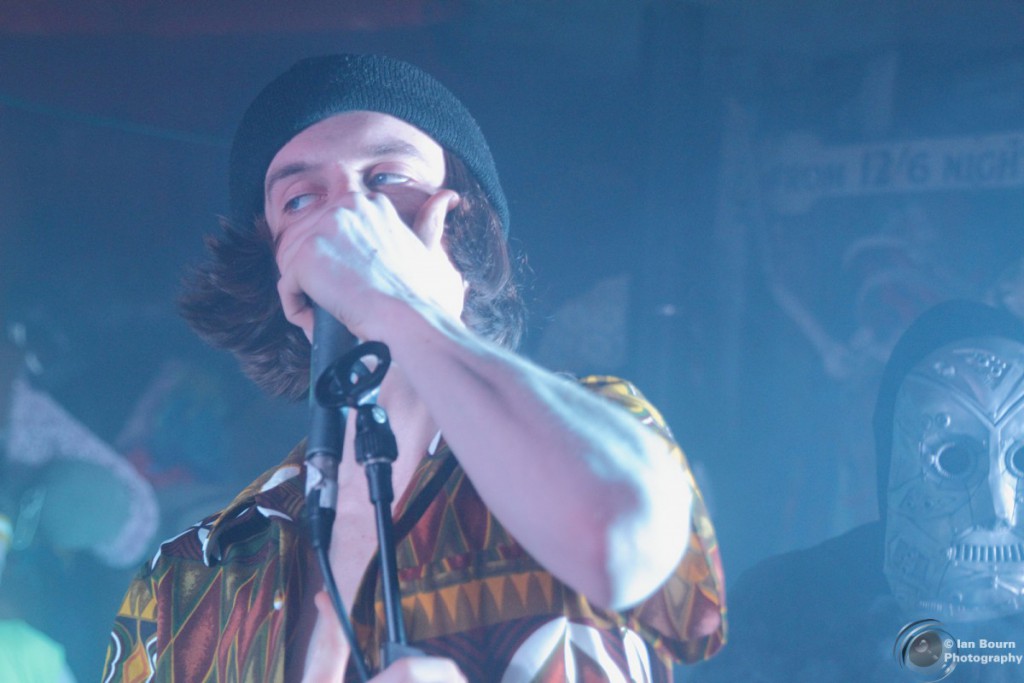 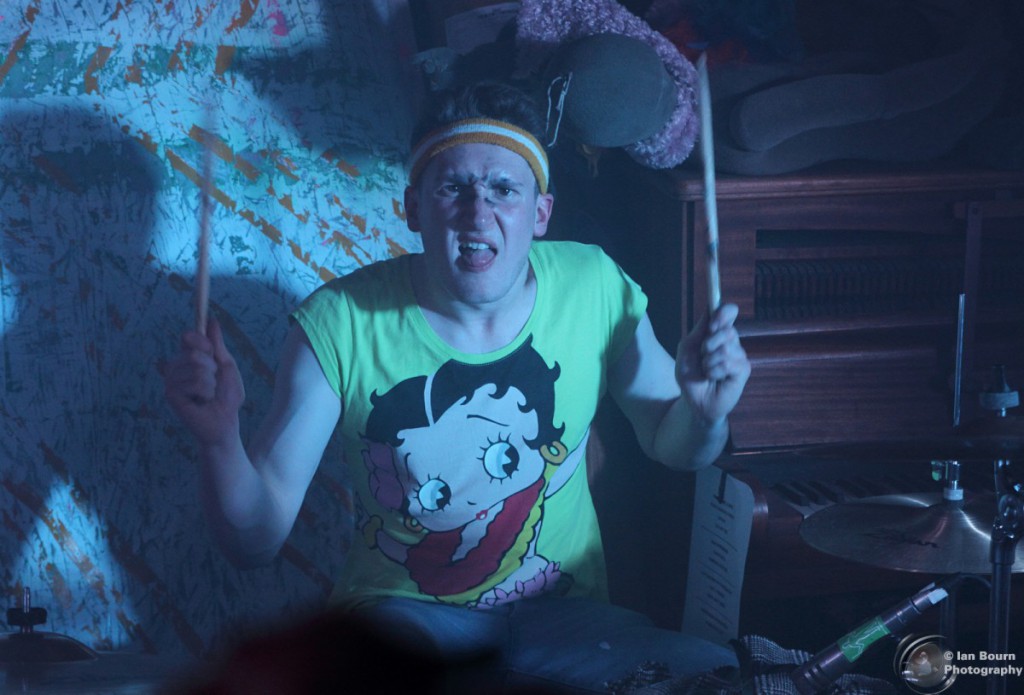 Luke opened up the set with Borderline, and the set list ran as follows – Black Sabbath Intro – with a smoke machine pumping the room full of smoke and a suitable old school “prog rock” sound of growls and howling guitars. Luke looked as if he was about to eat one of the mics he stopped when Ryan, wearing a hooded cloak, appeared from the thick smoke – and then they kicked off…. Spook, Occupy Me, Man Remembers, These Days, General Electric, Is It Raining In Your Mouth, Get A Woman, She’s Not There, Professor Dragonfruit and Poseidon’s Cat. A set of varied tempo, styles and attitude. They are a new band, but certainly do not sound like it. They have a maturity about them and they want you to take notice of them. Ryan has a vocal range many vocalists could wish for. He can deliver the melodic sections and reach the screaming heights so aptly displayed in “She’s Not There”. Luke powers the bass which looks as if it has been nailed high onto his chest. The guitars and vocals supplied by the very capable Nick and Josh, and they work brilliantly together combining and separating to give that unique sound. The man at the back on drums is Josh his skills help keep time and provide some real power to the sound. 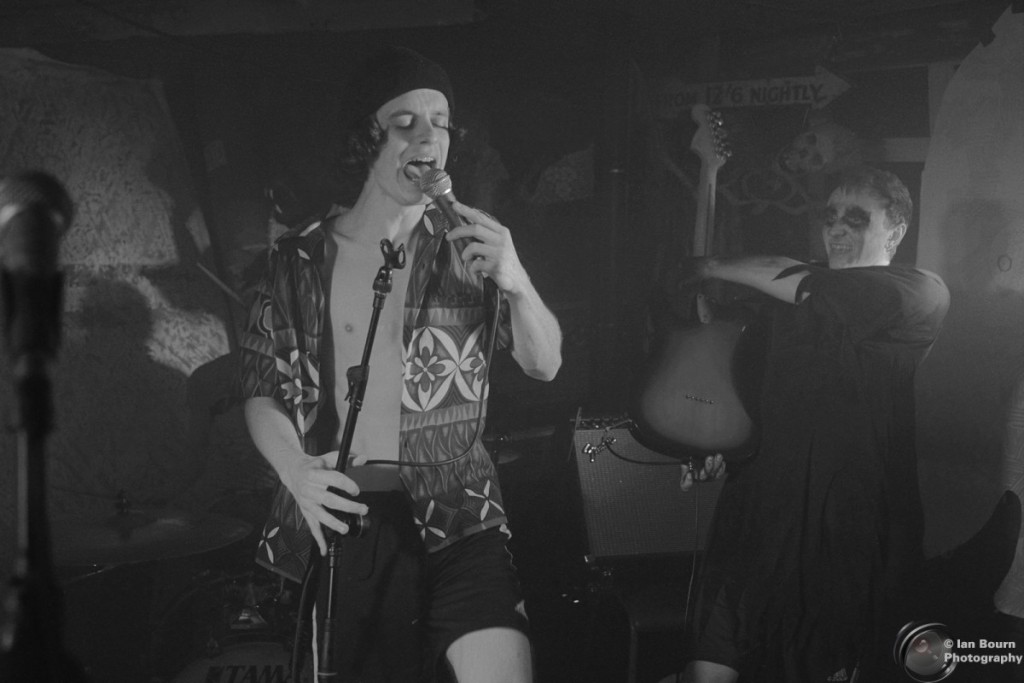 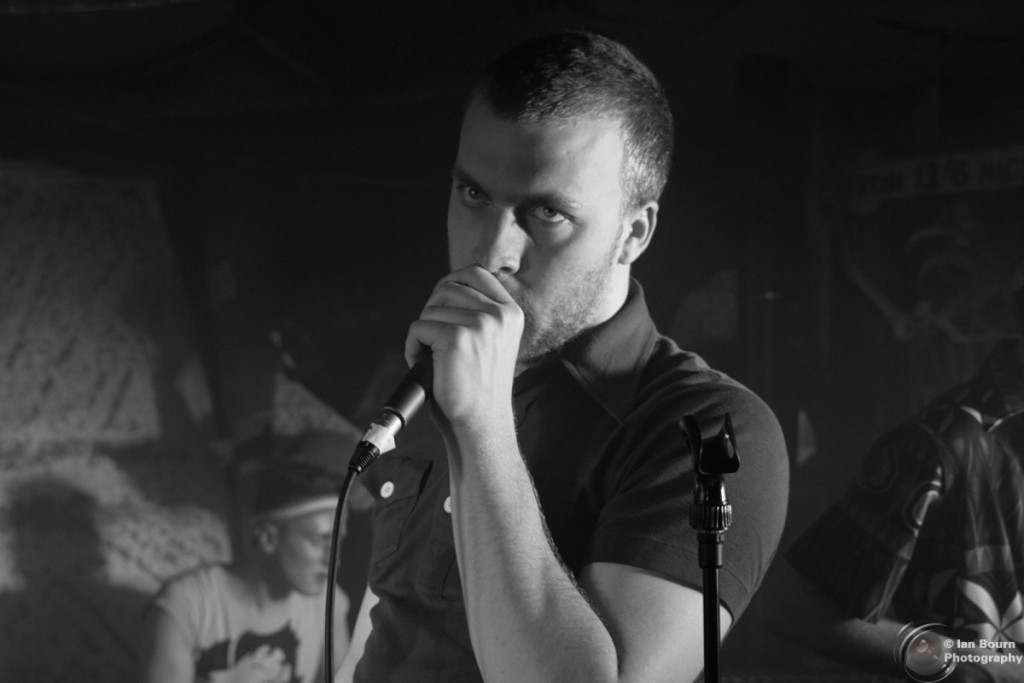 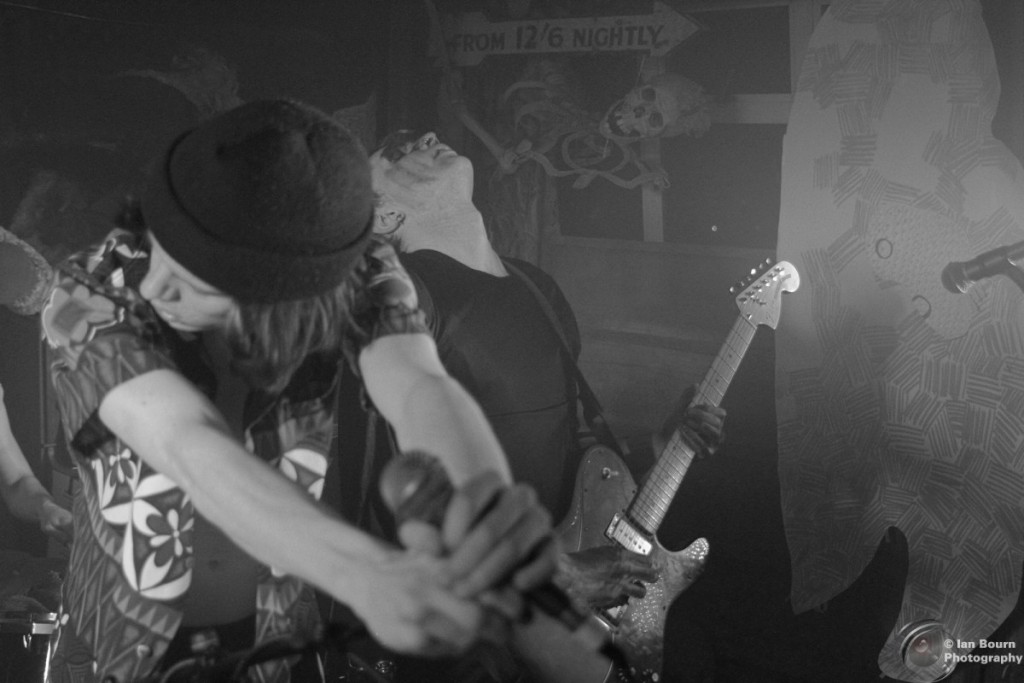 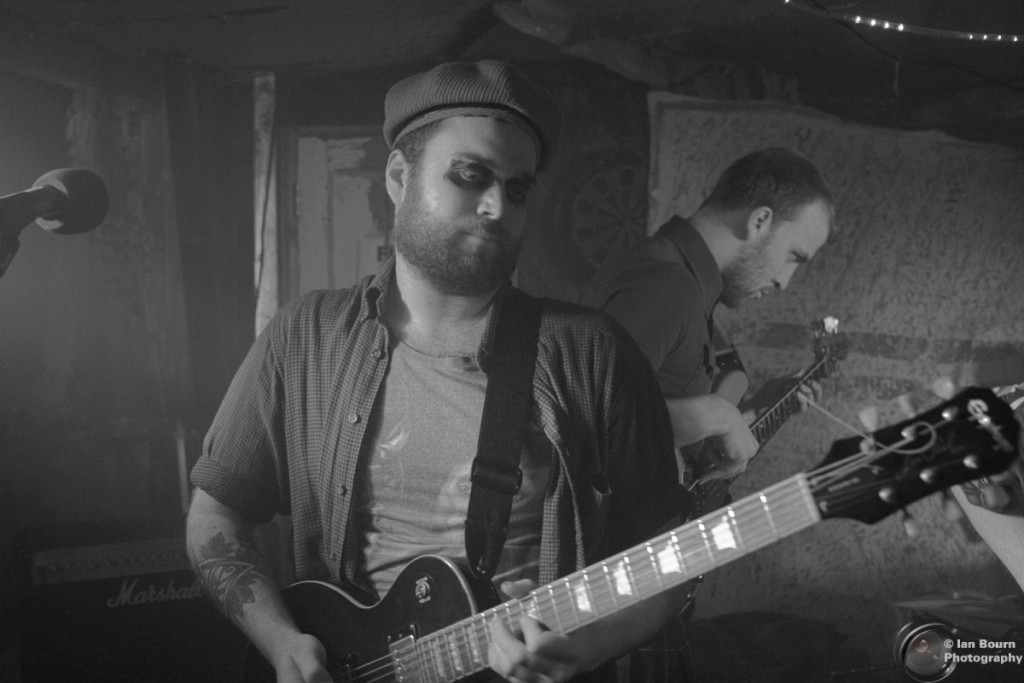 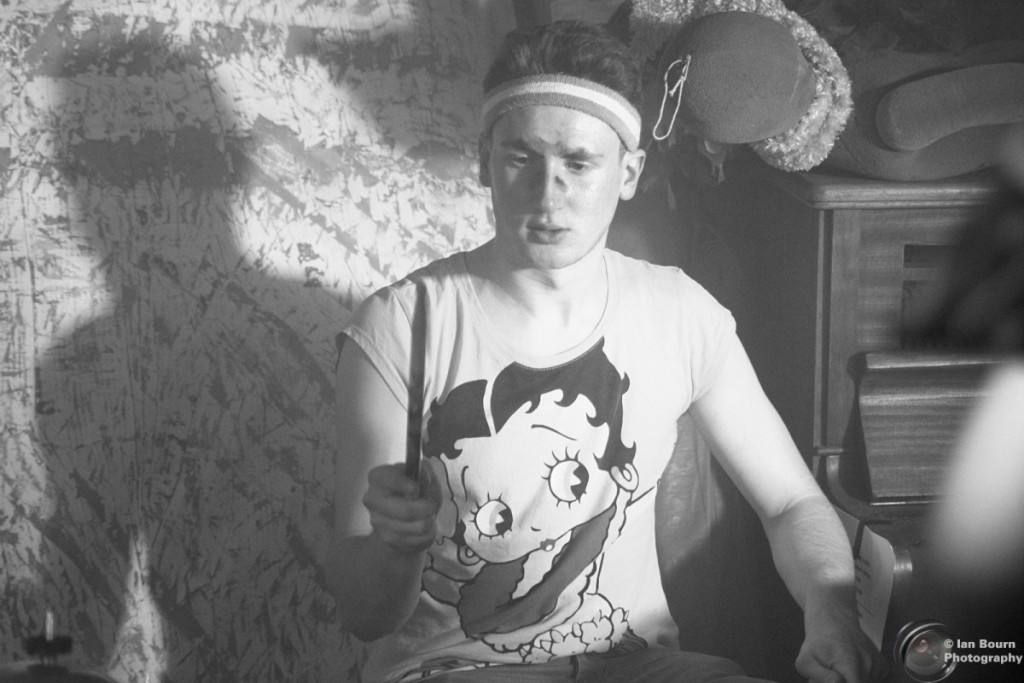 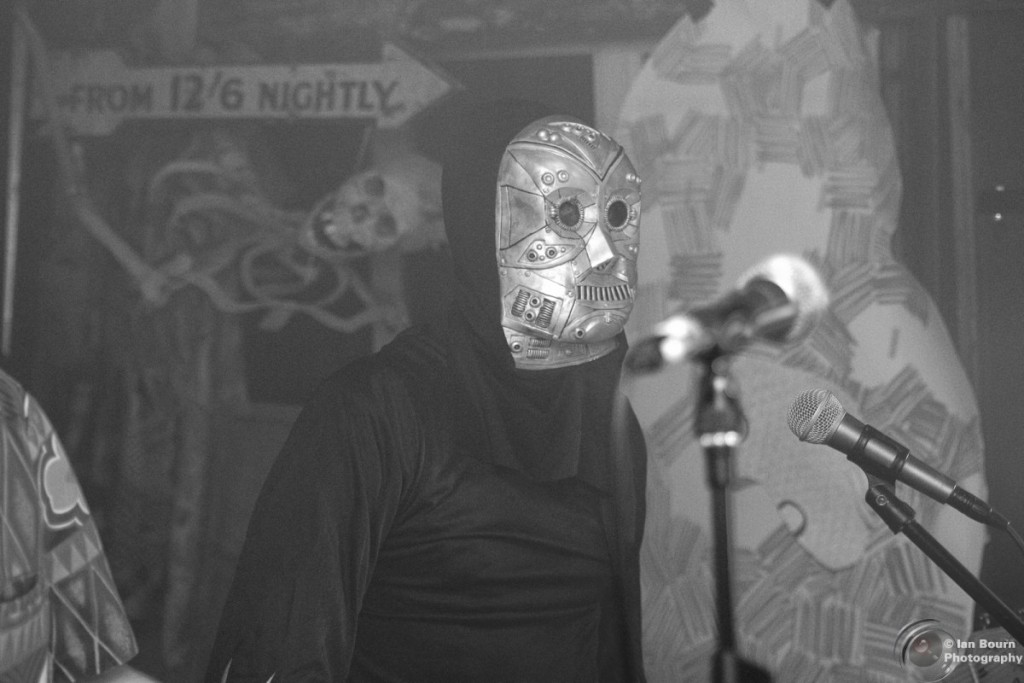 Chatting to the band I asked about the name Wizard Sleeve. It transpires the two guitarists came up with the name and the conversation that I can put into print ends here! We moved onto the cover of the Zombies classic “She’s Not There”. The band wanted to do a cover of a well known song and picked this one! They wanted to give it the Wizard Sleeve sound and in my view they have. It’s become a rocker of a tune and has to be seen performed live to fully get the changes and arrangements.The band however inject their humour into this, all joining in with “Sorry!” at the appropriate time.

The band had shut themselves away for a year before going public. They put in the hard work rehearsing, rehearsing and rehearsing! I saw the band on their third gig at The Hope and Ruin in Brighton. The energy and passion that oozes from these five guys on stage is something to behold. Its chaos and how they make it through a set without injury is a minor miracle!  The band want to have a great time on stage and share their music. They have ambition and they want to get out across the UK to a wider audience.

Considering the small confined space the lighting mix and sound was absolutely on point. It turned out it was Richard Durrant who was doing the sound and lighting! Richard also produced the bands new single. The smoke, a photographers nightmare, when powerful lights are thrown into the mix, served to create a electric atmosphere. The band vanishing and then appearing, or bits of guitars poking through the fog.

This was also a night of art and local artist Callum Farrell had produced two huge art works, one which was behind the band and the other which was on the floor being personalised by the crowd standing on it during the evening. Abigail Brothers also created some fine work which hung on some of the walls and you can see some of her work in the photos above. The music came to a close but the party was set to last into the small hours. This was a great launch party, I had a great time and I was working! Everything slotted into place and it ran like clockwork. Rooney Durrant put on the night

Rooney Durrant, the bands manager, had put the night together and announced the new single which Richard Durrant had recorded. Great job Rooney! The venue was a great choice and it was easy to forget we were on a boat! This with the skeletons, tea lights and “stuff” with some great lighting and smoke almost made you feel as if we had been taken underground to a wizards cavern.

The music came to a close but the party was set to last into the small hours. Rooney did introduce us to the new single “Spook“, and it sounded great. This will be available on Soundcloud soon! This was a great launch party, I had a great time and I was working! Everything slotted into place and it ran like clockwork.

The band had put together a “merch” desk. It was an unusual, to say the least, arrangement of items. All of the items had been personalised by the band. As I say, this band have talent, ambition and a great sense of humour

Wizard Sleeve are on Soundcloud: https://soundcloud.com/wizard-sleeve