This looked set to be a fine night of Rock n Roll and punk! Three bands were set to play and The Vibrators topping the bill on this part of their 40th Anniversary tour.

The Vibrators were founded by Ian ‘Knox’ Carnochan, bassist Pat Collier, guitarist John Ellis, and drummer John ‘Eddie’ Edwards. They first came to public notice at the 100 Club when they backed Chris Spedding in 1976. On Spedding’s recommendation, Mickie Most signed them to his label RAK Records.

The present lineup is Darrell Bath – guitars and vocals,  Pete Honkamaki – bass guitar and vocals and of course – the guv’nor, John ‘Eddie’ Edwards – on vocals and drums. 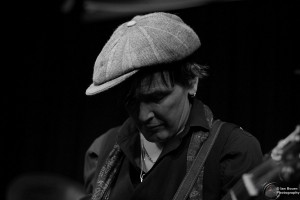 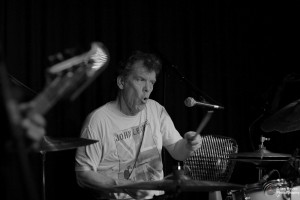 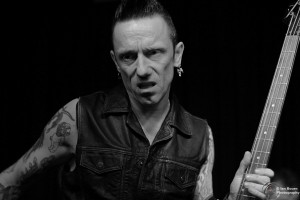 The band signed to Epic Records in early 1977. Their debut album, Pure Mania was co-produced with Robin Mayhew, the sound engineer for David Bowie’s Ziggy Stardust live shows, and reached the Top 50 of the UK Albums Chart. The album is well regarded by some music critics and, 17 years after its release The Guinness Encyclopedia of Popular Music named Pure Mania one of the 50 best punk albums of all time.

The Prince Albert is a small sized venue, but The Vibrators had pulled in a nice sized crowd. I like the venue as it is packed with atmosphere and history. It is very much back to the basic mentality of  live music and not the big business juggernaut. It was just pure punk mania rock n roll, no nonsense. The stage is set just a bit above the floor with no fancy lighting. I had managed a quick word with Pete whilst he was plugging in his monster of a bass guitar and he kindly gave me permission to take some photos. I got in nice and close. Eddy took to the stage and shouted “Alright Brighton?” as Darell climbed up onto the stage area. This is great, the band walked through the audience to get to the stage.

Eddie keeps that beat going furiously, resplendent in his trademark England tee with John Lennon across the top. He swaps and changes The Vibrators vocal sections with Pete. Both musicians demand the crowd move closer before launching into another song. Darrell starting up on his guitar and the band sizzled into the next track.. The band delivered song after song, old and newer tracks. The classic “Automatic Lover” fired up and now everyone who had been standing back from the stage hustled forward. This song has lost none of its gusto or vibrancy and the band powered it at us at full tilt. Brilliant! By now we were all in the V Mania mode. You have to be impressed with the way these three play, its fast and tight. Their back catalogue of songs in the set mix up pub rock, punk, and a touch of blues. They carry this off without any of their songs sounding similar or tired. The Vibrators were not going to stop, we didn’t want them to.

On stage bassist Pete Honkamaki is very tall! He towered above me wearing a black leather waistcoat/armless jacket and you couldnt help not notice the array of inked tattoos on his arms. And his guitar is slung low, real low. You knew Pete was on stage and you knew he meant business!

Eddie’s drumming is astonishing – brimming over with power and brilliance. He gives the audience the thumps, the fills and patterns to please the ear and to go side by side with Pete’s bass lines. He clearly loves what he does – and so does the crowd.

Darrell  pulled off some onstage guitar poses from time to time and displayed some of his fine playing. He did carry off the occasional glide across the stage whilst wearing his large floppy hat. We didn’t see him pull any body moves, I found out later he had hurt his back and so we cant blame him for that! Congrats to Darrell for doing what he did and getting up there. If I pull my back, I sit in a chair, chew some pain killers and watch TV. Darrell couldn’t do that – he had a show to do!

The drums thudded and Eddie stood up hands raised above his head as Darrell played the famous intro chords that led us into Baby Baby. Watch and listen to the power of The Vibrators – Eddie piling in on the drums and leading the crowd. Pete absolutely nailing the bass riff and fills for this classic track and also leading the audience into a chant-a-long,  brilliant Pete!, and then he is back to the mic to deliver the finale as he beat the living daylights out of his bass. You can hear the subtle brilliance from Darrell throughout, a minor slip on the chords ah – who cares. That’s what makes rock ’n’ roll great is its little imperfections and riding on the edge.

My beer bottle empty, my camera card full it clicked that I had watched a great punk rock performance. I put my camera away and jumped in with the crowd to see the end of the set. It was hot, sweaty and pushy. I never saw them play ‘back in the day’ and had missed their last visit to Brighton. The Guv’nor Eddie is now the only original from the first lineup. Knox had popped up at a few gigs on this tour, but sadly not in Brighton.

The Vibrators are punk rockers with history and attitude. They performed the set tight, sharp, fast, loud and proud.