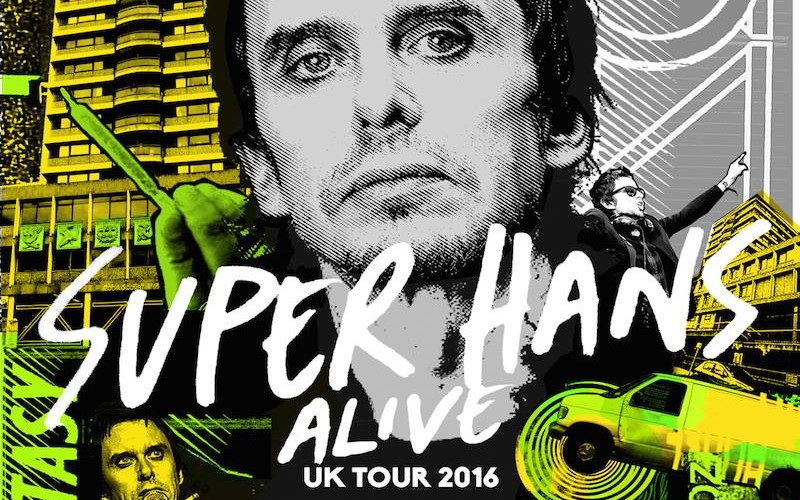 “Do you know the Big Beat Manifesto?” Asks Matt King, wearing an all black ensemble complete with shades as he saunters onto the stage at Concorde 2, fully in character as Super Hans; the drug bingeing ‘musician’ friend of Jez from the hit comedy Peep Show. “For the 2 of you who don’t, it goes Big Beats are the best, get high all the time.”

And so begins the Super Hans DJ set. In true Hans style, he was 20 minutes late to start, which was plenty of time for me to contemplate what I was really expecting from the night. After all, this wasn’t a Matt King (of Peep Show fame) DJ set. This was a fictional character I had grown to know so well over 9 series of brilliant comedy, playing his part oh so well.

It became apparent early on that Hans was in fact just the front man for the on-stage ensemble (which consisted of 2 other members: an actual DJ who I presume did most of the work, and a bearded fellow who spend the entire set shaking a maraca with robotic precision, despite the fact there was no visible mic to pick up this sound). I pointed out the fact that Hans was pretending to DJ to a friend, who was quick to point out that he wasn’t in fact a real person, so why would he be a real DJ?

Super Hans at @concorde2 is everything I expected it to be… am I dancing ironically? What is this? Feel like an extra on Peep Show. #brighton #peepshow #music #superhans #concorde2 #electro #funny #livemusic #djset

This reminder kind of made the night surreal. Matt portrayed Hans brilliantly, taking the credit for the music, running up to the mic to jeer the crowd up into a frenzy, and even getting on the guitar and keys to prove that Hans really is a pretty terrible musician.

On more than one occasion I had to ask myself ‘are we dancing ironically?’ The music choice was decent enough – a mix of electro, break-beat and 80’s synth pop (including Bowie), but I felt like an extra in Peep Show. I felt like Mark Corrigan at the gig, over analysing and trying to work out what the hell was going on.

At the end of the night there was of course an encore, although, in true Super Hans style, the chants of ‘One more tune’ were started by the man himself. Did you expect anything less?

Verdict: It was Super Hans, being Super Hans. What did you expect?